skip to main | skip to sidebar

India is a country known for ancient scripts,the number system,invetion of zero..and vedas.l Medicines in india are used by about 60 per cent of the world's population. These are not only used for primary health care not just in rural areas in developing countries, but also in developed countries as well where modern medicines are predominantly used. While the traditional medicines are derived from medicinal plants, minerals, and organic matter, the herbal drugs are prepared from medicinal plants only.

Use of plants as a source of medicine has been an ancient practice and is an important component of the health care system in India. In the Indian systems of medicine, most practitioners formulate and dispense their own recipes, hence this requires proper documentation and research. In west also the use of herbal medicines is growing with approximately 40 per cent of population reporting use of herb to treat medical diseases within the past year. General Public, academic and government interest in traditional medicines is growing rapidly due to the increase side effects of the adverse drug reactions and cost factor of the modern system of medicine.

There are about 45,000 medicinal plant species in India, with concentrated spots in the region of Eastern Himalayas, Western Ghats and Andaman & Nicobar Island. The officially documented plants with medicinal potential are 3000 but traditional practitioners use more than 6000. India is the largest producer of medicinal herbs and is called the botanical garden of the world. There are currently about 250 000 registered medical practitioners of the Ayurvedic system ,as compared to about 700,000 of the modern medicine system. In rural India, 70 per cent of the population depends on the traditional type of medicine, the Ayurveda.

Ayurvedic form of medicine is believed to be existent in India for thousands of years. It employs various techniques and things to provide healing or relief to the ailing patients. One of the things that ayurveda uses is medications of plant origin.

With the scripts in the Atharva Veda, we have evidence of a traditional use of medicinal plants that is more than 3000 years old.

It is estimated that about 80,000 species of plants are utilized in some form or other by the different systems of Indian medicine. The knowledge about plants and plant products is detailed ,sophisticated, and has evolved into a separate shastra itself, called Dravya Guna Shastra. Plants have been studied on the basis of clearly defined biological parameters like rasa (taste), vipaka (metabolic property), guna (quality), prabhava (biological effect) and virya (potency). The codified traditions have about 25,000 plant drug formulations that have emerged from such studies. In addition to this, over 50,000 formulations are believed to be existing in the folk and tribal traditions. All these point to the deep passion for and exhaustive knowledge about medicinal plants that have existed in this land from time immemorial.

Many herbs and spices are used in Indian cooking, such as onion, garlic, ginger, turmeric, clove, cardamom, cinnamon, cumin, coriander, fenugreek, fennel, ajowan (ajwain), anise, amchur, bay leaf, hing (asafoetida) etc. Ayurvedic medicine uses all of these either in diet or as an medicine. Some of these medicinal plants have been featured on Indian postage stamps. 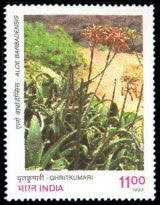 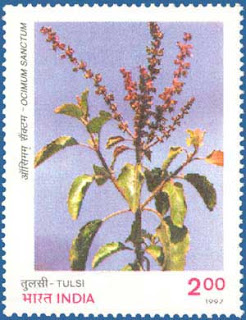 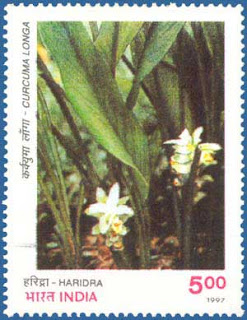 Continuing with the series that began on 28th October 1997, the Department of Posts now brings out another set of four stamps on the medicinal plants of India. The stamps featuring in this set are on Guggulu (Commiphora wightii), Brahmi (Bacopa monnieri), Aswagandha (Withania somnifera) and Amla (Emblica officinallis). 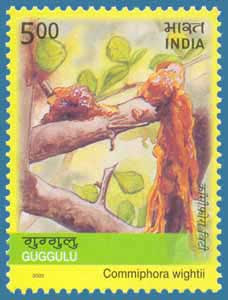 Guggulu (Commiphora wightii) is an armed shrub or small tree found in the arid and semi-arid zones of India, particularly Rajasthan. The oleo gum resin from its stem constitutes an important therapeutic agent used in the treatment of various categories of ailments like neurological conditions, leprosy, skin diseases, heart ailments, cerebro vascular diseases and hypertension. 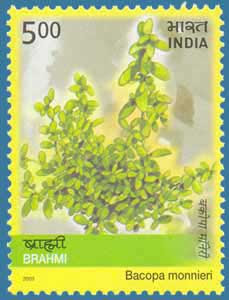 Brahmi (Bacopa monnieri) is a herb that spreads on ground, having fleshy stems and leaves. It is found in moist or wet places in all parts of India. Brahmi is useful for treating the diseases of the brain and to improve memory power. Brahmi-formulations are prescribed in rheumatism, mental disorders, constipation and bronchitis. It is also a diuretic 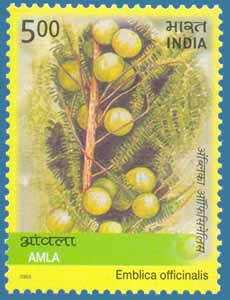 Amla (Emblica officinallis) is a medium sized deciduous tree found throughout India. It yields a globose pale yellow fruit known for its varied medicinal properties. It is regarded as an digestive, carminative, laxative, anti-pyretic and tonic. It is prescribed in colics, jaundice, hemorrhages, flatulence and many other disorders. 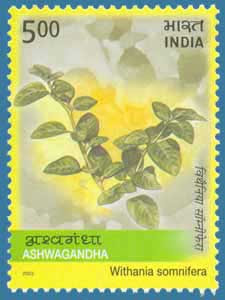 Ashwagandha (Withania somnifera) is a small or medium sized shrub found in the drier parts of India. It is a nervine tonic, anabolic and aphrodisiac. It is used also to treat general weakness and rheumatism.

some of the medicinal plants that we find in india along with their scientific names....

The common name is Arjun .Its botaical name is Terminalia arjuna.It belongs to a family called Combretaceae (rangoon creeper family)In Indian mythology, Arjun is supposed to be Sita's favourite tree.. Arjuna is a large, evergreen tree, with a spreading crown and drooping branches. Grows up to 25 m height, and the bark is grey and smooth. Leaves are sub-opposite, 5-14 × 2-4.5 cm in size, oblong or elliptic oblong. Flowers small, white, and occur on long hanging recemes. Fruit is 2.3-3.5 cm long, fibrous woody, glabrous and has five hard wings, striated with numerous curved veins. Flowering time of the tree is April-July, in Indian conditions Every part of the tree has useful medicinal properties. Arjun holds a reputed position in both Ayurvedic and Yunani Systems of medicine. According to Ayurveda it is alexiteric, styptic, tonic, anthelmintic, and useful in fractures, uclers, heart diseases, biliousness, urinary discharges, asthma, tumours, leucoderma, anaemia, excessive prespiration etc. According to Yunani system of medicine, it is used both externally and internally in gleet and urinary discharges.

The common name of this medicinal plant is Amaltas, Golden shower tree, Indian Laburnum .Its botanical name is Cassia fistula.It belongs to family called Caesalpiniaceae (Gulmohar family)This native of India,, is one of the most beautiful of all tropical trees when it sheds its leaves and bursts into a mass of long, grape-bunches like yellow gold flowers. A tropical ornamental tree with a trunck consisting of hard reddish wood, growing up to 40 feet tall. The wood is hard and heavy; it is used for cabinet, inlay work, etc. It has showy racemes, up to 2" long, with bright, yellow, fragrant flowers. These flowers are attractive to bees and butterflies. The fruits are dark-brown cylindrical pods, also 2' long, which also hold the flattish, brown seeds (up to 100 in one pod) These seeds are in cells, each containing a single seed. A postal stamp was issued by the Indian Postal Department to commemorate this tree. 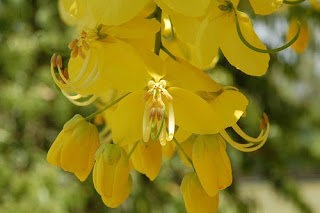 Its medicinal uses are: The sweet blackish pulp of the seedpod is used as a mild laxative 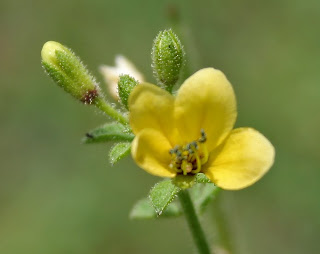 The common name of this medicinal plant is Aloe vera, Medicinal aloe, Burn plant ,Hindi: Gheekumari. Its botanical name is Aloe vera. It belongs to family called Asphodelaceae (Aloe family).Its Synonyms are Aloe barbadensis, Aloe indica, Aloe vulgaris. Aloe , a popular houseplant, has a long history as a multipurpose folk remedy. Commonly known as Aloe vera, the plant can be snapped off and placed on cuts and burns for immediate relief. Aloe vera is a clump forming succulent whose fleshy gray-green leaves are arranged in a vase shaped rosette atop a very short stem. 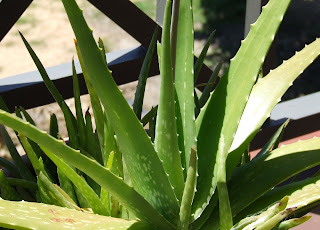 The leaves are up to 18 in long and 2 in wide at the base, slightly grooved on top, and terminating in a sharp point. The leaves have small grayish teeth on the margins. The main rosette gets up to about 2 ft high, and the plant continually produces little offset rosettes. In winter and spring, medicinal aloe bears small tubular yellow flowers on branched stalks up to 3 ft tall. The real Aloe vera has yellow flowers, but many of the clones available have orange flowers. Although Aloe Vera is a member of the Lily family, it is very-cactus like in its characteristics.

Aloe Vera contains over 20 minerals, all of which are essential to the human body. The human body requires 22 amino acids for good health -- eight of which are called "essential" because the body cannot fabricate them. Aloe Vera contains all of these eight essential amino acids, and 11 of the 14 "secondary" amino acids. Aloe Vera has Vitamins A, B1, B2, B6, B12, C and E. In India, Aloe vera is believed to help in sustaining youth, due to its positive effects on the skin. Hence it is called ghee kunvar or ghee kumaari.

The common name of this medicinal plant is Eucalyptus, Safeda (Hindi) . Its botanical name is Eucalyptus spp. It belongs to family called Myrtaceae (Myrtle Family) .Eucalyptus is a diverse genus of trees (rarely shrubs), the members of which dominate the tree flora of Australia. All eucalypts are evergreen, although some species have deciduous bark. On warm days vapourised eucalyptus oil rises above the bush to create the characteristic distant blue haze of the Australian landscape. Eucalyptus oil is highly flammable (trees have been known to explode) and bush fires can travel easily through the oil-rich air of the tree crowns. 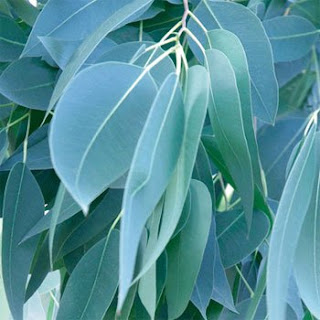 Eucalypts exhibit leaf dimorphism. When young, the leaves are opposite and often roundish and occassionally without petiole. When several years old, the leaves become quite slender and with long petiole. Eucalyptus flowers typically vary from white, cream, pink, yellow, or red depending upon the species. The flower petals and stamens are fused into a cap called an operculum — as the flower opens the cap is shed. The flowers appear as a fuzzy, cream-yellow ball of stamens. After flowering, hard, woody seed pods develop and are often key to identifying the plant species. Typically, these seed heads remain on the tree until released by fire or the plant's death.

Eucalyptus oil has medicinal properties - the well known Vicks vapo-rub is made out of eucalyptus oil. Traditionally, eucalyptus oil is known to be a good medicine for relieving nasal congestion in cold. 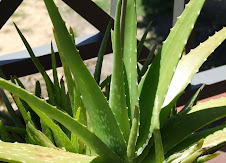